MONTREAL — Just five years ago, Mani Soleymanlou, a Quebec actor of Iranian origin, was playing characters named Ahmed, Hakim and Karim on French-language television shows produced in the province. Today, his roles include Patrick, a banker, in one successful TV series, and a corrupt police officer with the very Québécois name Robert “Coco” Bédard, in another.

Coco appears in “C’est comme ça que je t’aime,” or “Happily Married,” a dark, rollicking comedy set in the 1970s in a suburb of the provincial capital, Quebec City — a time and place where the chances would have been slim of running into someone like Mr. Soleymanlou: an immigrant who was born in Iran, and grew up in Paris, Toronto and Ottawa, before landing in Quebec.

“I think,” Mr. Soleymanlou said in French, with an accent picked up in Paris, “Québécois culture has long been very homogeneous.”

But that is changing — thanks in part to people like him.

That Mr. Soleymanlou, 40, went from playing typecast outsiders to an insider named Coco Bédard in a few short years is also indicative of larger shifts in Quebec society.

Though it still remains rooted in the French language, in ethnicity and in a shared history, Québécois identity is in flux right now — and what it means to be Québécois is what Mr. Soleymanlou has spent the past decade deconstructing in his other career as a playwright. 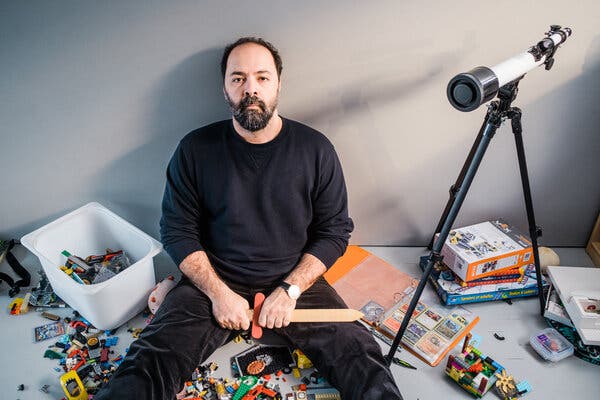 With his family, Mr. Soleymanlou was among the Iranian exiles who streamed to France in the years after Iraq invaded Iran in 1980.

At a recent performance at the Théâtre Jean-Duceppe in Montreal, the packed audience gave Mr. Soleymanlou a standing ovation for his trilogy, “Un, Deux, Trois.” For four and a half hours, he dissects his own search for identity after arriving in Quebec, which made him feel like more of an outsider than anywhere else, and he explores the meaning of identity itself and the place of French speakers in Canada, an otherwise overwhelmingly Anglophone country.

Collectively, the three plays raise difficult questions that go to the heart of Québécois identity.

Can an immigrant from Iran, or anywhere else, ever be considered Québécois? If the French language is a pillar of Québécois identity, what is the place of the French spoken by newcomers from the Maghreb or West Africa, accents heard more and more throughout the province? Is French Québécois identity fated to disappear because of demographics and geography? Or can it — should it? — reinvent itself by becoming part of the global Francophone world?

If the success of Mr. Soleymanlou’s trilogy and the arc of his acting career suggest that Québécois identity is expanding, the recent provincial elections also show that the evolution hasn’t been smooth and isn’t a given. The provincial premier, François Legault, and his allies won in a landslide, partly by promoting a cultural nationalism that portrayed immigrants as a threat to Quebec society.

Quebec nationalists, especially during the heady days of the independence movement in the 1970s and 1980s, upheld immigrants’ mastery of French as the key to acceptance and integration in Quebec society.

But Quebec nationalists have moved the goal posts in recent years, emphasizing instead that immigrants must adhere to an amorphous notion of Quebec values. Politicians like Mr. Legault and his allies, while stressing the importance of French, have also described immigration as undermining Quebec’s identity.

“They’re using identity to score political points, especially among older voters, because that’s where fear works,” Mr. Soleymanlou said. “And that’s the problem. They’re not talking to the new Quebec.”

Mr. Soleymanlou spoke recently during an interview at a café in Hochelaga, a Montreal neighborhood where he lives with his partner, Sophie Cadieux, a Québécoise actress, and their son. Appointed to the prestigious position of director of the French theater at Canada’s National Arts Centre in Ottawa last year, Mr. Soleymanlou was in the middle of a tour of eight Canadian cities with his trilogy.

“In his work, he was able to use humor and laughter and this technique almost like standup comedy to talk about his experiences,” said Yana Meerzon, a professor of theater at the University of Ottawa, contrasting his plays with the straightforward tragedies of some other migrant stories.

She added that his work acknowledged the differences between adult immigrants and child immigrants. “They don’t speak from that culture, necessarily, they speak from their own culture, which is mixed.”

Mr. Soleymanlou’s successful dual career as actor and playwright points to the opening up of French Québécois popular culture, which has long existed apart from the rest of Canada. Despite the province’s demographics being changed by successive waves of immigration over many decades, the stage and the screen had until recently been dominated by stories told by French Québécois for an audience of French Québécois.

“We were very late,” Mr. Soleymanlou said, “but now we’re accelerating to catch up.”

Born in Tehran a couple of years after Iraq invaded Iran in 1980, Mr. Soleymanlou and his family joined a stream of Iranian exiles to France. In Paris, he attended public schools and learned French, before the family packed up again, this time for Toronto, when he was 9.

In Toronto, he went to schools with immigrants like himself and eventually “forgot about himself” — immersed in the ever-widening circle of multiculturalism that is the ethos of Canada outside Quebec.

He arrived two decades ago in Quebec to study at the National Theatre School of Canada in Montreal. By then, newcomers from Francophone Africa, many of them Muslim, were reshaping the city’s landscape, the way previous immigrants from Europe and Asia already had for decades. Still, the arts were the domain of the French Québécois.

That was made clear to him on his first day at the school where he and three others accounted for the only non-French Québécois students. Four was the most there had ever been in a school with more than 100 students.

“Since my arrival in Quebec, I’ve never felt more like a guy from elsewhere, like a stranger, an exile, lost, an immigrant,” Mr. Soleymanlou said in his play “Un.”

The school director at the time made a joke of struggling to pronounce his name, Mr. Soleymanlou recalled. Then, using two common French Québécois family names, she said, “They’ll stop criticizing us for having only Tremblays and Girards at the National Theatre School.”

“I didn’t understand at all why we were being separated into two categories of students,” he said.

That first day set off a search for identity — his own and that of the French Québécois — that, almost by accident, eventually launched his career.

In 2009, he was invited to perform at the Théâtre de Quat’Sous in Montreal, which then showcased immigrant artists every Monday evening. Drawing on his life, he wrote and performed a monologue that would become “Un,” the first part of his trilogy.

“Since my arrival in Quebec, I’ve never felt more like a guy from elsewhere, like a stranger, an exile, lost, an immigrant,” he said in the play. “Never have I had to explain so often where I came from, to justify my accent, to describe my path, to pronounce over and over again my family name.”

His anguished search for identity in “Un” resonated in a province where the dominant French Québécois had long fought to preserve their own sense of self, surrounded as they are by an English majority.

“Quebec is a society that’s had to protect and defend itself, always positioning itself in opposition to the other,” Mr. Soleymanlou said. “That’s something I didn’t understand in the beginning — that the Québécois want to know how you define yourself because they have to define themselves to protect themselves.”

Mr. Soleymanlou continued his search for identity in “Deux,” in a dialogue with a bilingual Jewish Montrealer, and then in “Three,” which featured three dozen French speakers who were not French Québécois.

Before 2017, Mr. Soleymanlou had never been offered a role with a French name. “There’s been a radical change in the past decade, a phenomenal paradigm shift in the arts in Quebec,” he said.

As his theater career took off, the scripts sent his way changed. In 2017, while performing his trilogy in Paris, he got a call from Radio-Canada, the public broadcaster, offering him the role of “Philippe” in a new series. He had never been offered a role with a French name before.

But when he got the script, he found that his role had been changed to a Greek named “Yaniss.” The producers said sorry, but he remained Yaniss.

He had to wait two more years for his first meaty role as an ethnic French Québécois — that of the corrupt, though lovable, cop in “Happily Married,” a series about two couples in a very French Québécois suburb, Sainte-Foy, who turn to organized crime while their kids are away at summer camp.

“The role of a police officer, in the 1970s, in Sainte-Foy, in Quebec, played by someone of Iranian origin?” Mr. Soleymanlou said. “Ten years ago, that would have been impossible.”

In the Pacific, Outcry Over Japan’s Plan to Release Fukushima Wastewater