High Falls makes a big impression for such a tiny place.

Covering just 1.69 square miles in Ulster County, with a population of about 700, according to the 2020 census, the hamlet has attracted some big names over the decades. The actors Aidan Quinn and Mandy Patinkin own homes there. Scenes from the 1961 movie “Splendor in the Grass,” starring Natalie Wood and Warren Beatty, were shot at the Rondout Creek waterfall that gave High Falls its name. And the painter Marc Chagall lived there from 1946 to 1948, after fleeing Europe during the Holocaust. (The blue wood-frame house where he lived and the building next door that served as his studio are currently for sale.)

“It’s the cutest small town,” said Ilan Bachrach, 40, an actor who attended a local theater camp as a teen and recently moved to the hamlet from Gowanus, Brooklyn, to open a pizzeria with Innis Lawrence, 40, a High Falls native he met at the camp, and Mr. Lawrence’s wife, Sophie Peltzer-Rollo, 38.

“I’d had his pizza for decades,” Mr. Bachrach said of Mr. Lawrence, who used to bake wood-fired pizza in his backyard with his father. “It was always exceptional in every way — the ingredients, the flavor, the combinations, the dough.” 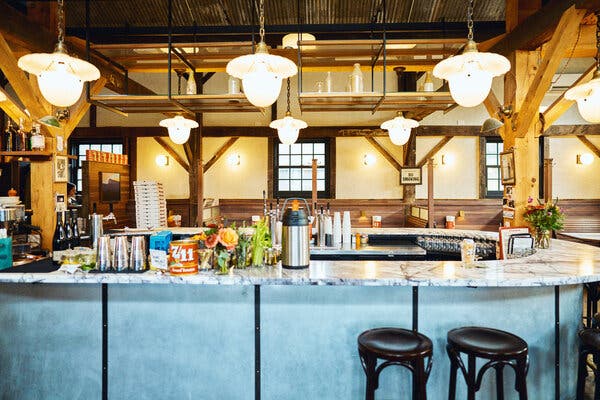 Ollie’s Pizza has become a popular gathering place since it opened in August 2020.Credit…Paul Barbera for The New York Times

In December 2019, the three bought a refurbished barn for $350,000, and it now houses Ollie’s Pizza. Mr. Bachrach lives in an apartment above another of the partners’ ventures, a soon-to-be restaurant, residential and retail space in a two-story building they bought for $435,000 in High Falls’s small commercial district. “I love living in town — it’s so close to everything,” he said. “I can walk to Ollie’s.”

Amy Levine, an associate broker with Berkshire Hathaway HomeServices, said that “High Falls has always been a popular destination for people that want to get away from the hustle and bustle of city life and still remain in a vibrant and stimulating community.”

Nestled between the Catskill Mountains to the north and the Shawangunk Ridge to the south, with the Rondout Creek winding through it, High Falls is minutes from two well-known hiking and rock-climbing destinations: the Mohonk Preserve and Minnewaska State Park Preserve. The hamlet has long attracted New Yorkers seeking weekend homes; during the pandemic, many of those weekenders have become full-time residents.

Elizabeth Kane, a retired public interest lawyer, and her husband, Richard Newman, a real estate lawyer, were drawn by the opportunity to interact with nature.

“I wanted dogs, and I wanted a garden, and I wanted to be able to see wildlife,” said Ms. Kane, 76, who moved to High Falls in 2014 from Washington Heights, in Manhattan. (Mr. Newman, 70, split his time between Manhattan and High Falls until the beginning of the pandemic, when he moved there full time.) “We can view the Shawangunk Mountains behind our house and the Catskills in front of our house.”

High Falls’s small commercial center is in the town of Marbletown, and sections of the hamlet also lie in the towns of Rosendale and Rochester. Some businesses and residences that fall outside High Falls’s official geographic boundaries have High Falls addresses because they are served by the High Falls post office.

The hamlet’s architecture is eclectic, with 18th-century stone houses as well as high-end contemporary homes in the 45-acre, seven-home Duchess Farm Equestrian Community development, where Ms. Kane and Mr. Newman live. The downtown area is lined with well-preserved examples of the 19th-century architecture that sprang up around the Delaware and Hudson Canal, which transported coal from Pennsylvania through High Falls to Kingston, N.Y., where it was shipped to New York City.

That history, including two interactive displays that show visitors how canal locks work, is on display at the D&H Canal Museum and Mid-Hudson Visitor Center. The museum, which was previously in an 1885 church, reopened in June in a 1797 canal house that was the location of the Depuy Canal House restaurant for more than 40 years. (In a high moment for High Falls, the restaurant received a four-star review from New York Times food critic Craig Claiborne in 1970.) The D&H Canal Historical Society, which runs the museum, sponsors a flea market every weekend from April through October at nearby Grady Park.

Along the commercial strip, a sanitized version of the nearly 50-year-old Egg’s Nest restaurant reopened in 2017 under new ownership, still colorful but without the generous, low-priced entrees that had made it a local favorite. The owners of the Northern Spy Café, known for American comfort food, reopened it in 2016 as the Spy Social Eatery & Bar, after a two-year hiatus. And in the thick of Covid, in August 2020, Ollie’s entered the scene with 12 outdoor tables and scant competition in the pizza arena.

“There’s something for everyone in High Falls, and somehow Ollie’s seems to be the center of it all,” said Tess Becker, 32, a pediatric cardiac surgery physician assistant at Mount Sinai Hospital who bought an antique stone house in High Falls this June for $700,000, after a two-year search. As for the flea market, she said, “we like to go a lot — there’s no better place to decorate an 1800s house than a flea market.”

In years past, graduates of the State University of New York at New Paltz would head to remote places like High Falls to find affordable housing. But now the hamlet’s real estate prices have left New Paltz’s in the dust.

In early December, Zillow showed nine single-family homes for sale in High Falls, from an antique three-bedroom house on 0.16 acres, listed for $235,000, to the 4,536-square-foot church that formerly housed the D&H Canal Museum, listed for $950,000.

“You find this tight-knit community of people from all over, all with one thing in common — love of the outdoors — whether it’s hiking, hang-gliding, snowshoeing or skiing,” Ms. Becker said.

Ms. Kane described High Falls as “sweet, small and modest,” but she said she can tell by the comments on the Nextdoor neighborhood app that some longtime residents resent the wealthier newcomers.

Mr. Bachrach, who in addition to being a developer is a member of Nature Theater of Oklahoma, a New York-based theater company, said High Falls has met his expectations in all but one area: “I would say dating is a lot harder here, and most people who live here seem to show up partnered already.”

After meeting Mr. Patinkin and his wife, the actress Kathryn Grody, at Ollie’s, Mr. Bachrach appeared with them in a matchmaking video that Mr. Patinkin posted on social media last fall. It begins with Mr. Bachrach announcing, “I’m looking for a wife,” followed by the sound of Mr. Patinkin laughing offscreen.

The Duchess Farm Equestrian Community offers home sites and custom homes, as well as a horse-boarding facility.Credit…Paul Barbera for The New York Times

Students in High Falls are served by the Rondout Valley Central School District, which operates two elementary schools, an intermediate school, a junior high school and a high school. In 2020-21, the district had 1,734 students, according to the New York State Department of Education; 83 percent identified as white, 8 percent as Latino, 3 percent as Black, 2 percent as multiracial and 2 percent as Asian or Pacific Islander.

In 2022, Rondout Valley High School students’ average verbal SAT score was 599, compared with a statewide average of 534; their average score in math was 604, compared with 533 statewide. The high school had a 92 percent graduation rate in 2021.

High Falls is about a 20-minute drive from Exit 18 on the New York State Thruway. The drive to the George Washington Bridge takes about 90 minutes, depending on traffic.

The Trailways bus station in Rosendale, N.Y., is a seven-minute drive from High Falls. Parking is free, and the trip to Manhattan takes about two hours; fares vary depending on when the ticket is bought and how many seats are available. The Trailways station on Main Street in New Paltz is roughly a 15-minute drive; the park-and-ride lot near Exit 18, which also provides free parking, is about 20 minutes away.

Another mass transit alternative is the Metro-North train from Poughkeepsie, a 30-minute drive from High Falls.

High Falls was settled in the late 17th century and developed from a farming community into an industrial mill site in the 18th century, according to the Marbletown Historic Preservation Commission.

With the construction of the 108-mile Delaware and Hudson Canal between 1825 and 1829, High Falls became a transportation center. The discovery of the local natural cement that was used to build parts of the canal gave rise to a new industry.

The canal closed in 1898 because of competition from railroads, according to the National Park Service. In the early 1900s, the construction of the 92-mile Catskill Aqueduct, carrying water from the Ashokan Reservoir through High Falls to the Hillview Reservoir in Yonkers, N.Y., gave the hamlet an economic boost. Over the next century, High Falls’s reputation as a summer and weekend destination grew, thanks to its proximity to Mohonk Mountain House.

Tags
Can From House That With