Nepotism babies, performers who were launched into the entertainment industry with a boost from a family member or two, have a bad reputation. Maybe they deserve a better one. During the Big Apple Circus’s “Dream Big,” the latest splendid show to alight beneath its lavish tent in a corner of Lincoln Center’s plaza, second-, third- and fourth-generation performers swoop, swing, somersault and traverse a high wire 20 feet in the air. In the short videos that precede the acts, each credits their success to the mothers, fathers, uncles or grandparents who went into the ring before them. Nik Wallenda, the headliner, can trace his big top lineage back nearly 250 years, as can his 69-year-old mother, Delilah Wallenda, who helps him onto that wire. 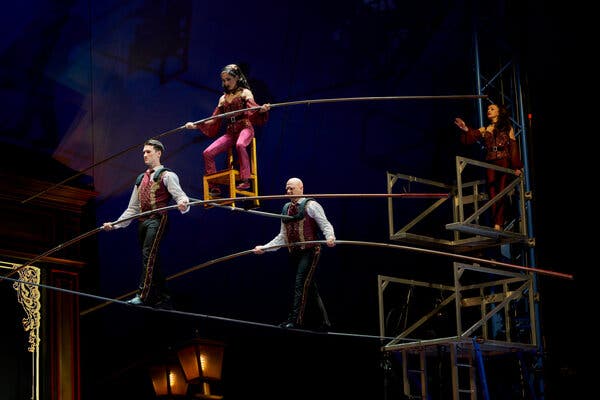 The Wallenda family executes a truncated version of their signature pyramid tightrope trick.Credit…Seth Caplan for The New York Times

Sure, these performers started their careers a couple of rungs up the ladder. Then again, that ladder is unstable and balanced atop a tottering platform. So who’s complaining? And who has time to complain when one’s mouth is too busy shrieking in terror and delight?

In the past decade, the Big Apple Circus has undergone a few contortions of its own. It filed for bankruptcy in 2016 and re-emerged a year later as a for-profit enterprise. The 2019 show delivered a more grown-up experience, with a ringmistress imported from the adults-only Bindlestiff Family Cirkus and the introduction of some sexed-up acts. The Covid-19 pandemic foreclosed the 2020 season. And though the tent opened again in November 2021, this was weeks before anyone in the 5-to-12 crowd could have been considered fully vaccinated. But now vaccines are available to all, making the one-ring a more comfortable space, and the lineup is meaningfully similar to last year’s, a gesture that assuages any feelings of having missed out.

The circus reopened in November 2021, before young children could be considered fully vaccinated. This year’s show is more family-friendly.Credit…Seth Caplan for The New York Times

My family is among those who gave the circus a pass last year. And I had wondered how it would feel to be back — at close quarters, with no masking or vaccine requirements — at the big top again. Would a modifier like “death-defying” mean less when everyone in the tent — performers, spectators — had lived through a global pandemic? Shouldn’t we get spangled costumes, too? And in truth, the evening didn’t begin especially well. There were long lines — in the rain — to walk through metal detectors, and the promised preshow performances never materialized. The main event started 20 minutes late, 15 minutes after an $8 bag of cotton candy had been consumed.

But as soon as the curtain opens, wonder makes a swift return. “Dream Big,” directed by Philip Wm. McKinley, is a brisk, back-to-basics experience, smaller and less glitzy than the Ringling Bros. and Barnum & Bailey extravaganzas of years past, but brimming with pizazz. There is no Wheel of Death this time, and even the Wallendas seem to fly with just a bit more care. If the show doesn’t tell a story — “Dream Big” is the organizing theme in only the loosest sense — it suggests, welcomingly, that anyone might want to grow up and join the circus, particularly those performers who grew up in it.

After the opening song and dance, the performers desert the petite, red-curtained ring and Elli Huber rises above it, spinning atop a trapeze. The safety wire strapped to her waist is clearly visible, but those, like me, who run a little anxious, may consider that a relief. She is followed by Veranica, a cheerful tween who leads a quintet of trained dogs through a frolicsome routine. Two of her poodles can pilot scooters. Bliss. Gena Cristiani juggles pin upon pin; Rokardy Rodríguez performs a precarious balancing act. Axel Perez, his nephew, swings and sways atop the rolla bola, a platform balanced atop one or more rolling cylinders. TanBA, a magician who had surprising success on “Britain’s Got Talent,” presents a frantic, pop-eyed act in which he swallows a dozen or more razor blades. (“DO NOT EVER TRY THIS,” I whispered to my children.) After the intermission, Irina Akimova performs a hoop act, and Nik Wallenda and his family perform a truncated version of their famous pyramid act, in which two of them traverse the wire while balancing a third Wallenda — without nets. Truncated is fine!

The ringmaster, Alan Silva.Credit…Seth Caplan for The New York Times

In between the defter displays, Johnny Rockett, the clown, lampoons various circus skills. His character is a janitor and general roustabout, angling for a spot in the show. Rockett is of course a third-generation clown and a practiced comedian. But his routine pokes fun at a popular alternative to the nepo baby route — the overconfidence of the mediocre white man. The character he plays can’t do handstands or hula hoop or train dogs with any dexterity. (At the performance I attended, the dog in his act defecated on the stage, an apparent improvisation.) But the show keeps giving him the space to try. Arguably too much space. Three appearances might have been enough. Then again, he dropped a prop light bulb on me to general laughter. So maybe that’s just my wounded dignity talking.

The most extraordinary act is among the simplest, an unpretentious silks routine performed by the ringmaster, Alan Silva, a sixth-generation circus performer. Silva is a little person, standing at 3 feet 10 inches. In his early life, as he says in the video that precedes his act, he was bullied for his height and urged toward clowning. But he dreamed of an aerial act instead. When he removes his frock coat and abandons himself to the silks, he really seems to fly. It’s a dream come true, through practice and audacity. And it’s as big as anything.

Tags
Act Big That Who Year