Today we’ll look at an old New York story, a soap opera-worthy tale that bubbled up as the Metropolitan Opera prepared to revive a real opera on New Year’s Eve. 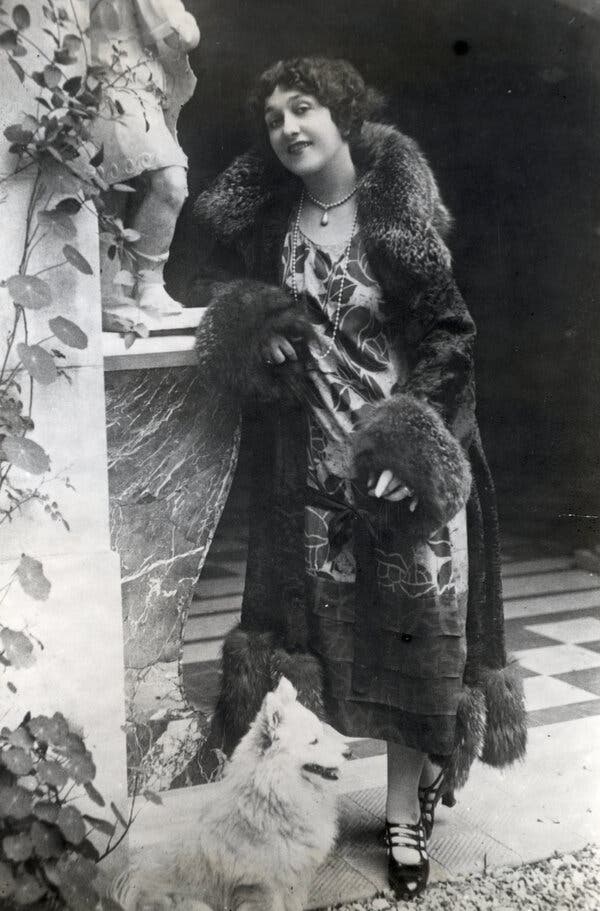 The bride was an Italian opera star with an appetite for money. The groom, who came from a famous old New York family, happily signed over much of his fortune to her — about $30 million in today’s dollars. And they broke up less than a week after the wedding.

It sounds like a soap opera. But this very real imbroglio captivated New York in the early 1900s, with boldface names and front-page headlines. A century later, it’s relevant again as a back story to “Fedora,” the Umberto Giordano opera that the Metropolitan Opera is reviving for eight performances starting on New Year’s Eve.

Lina Cavalieri, who starred in the Met’s first production of “Fedora,” certainly brought passion to her role as a globe-trotting, love-struck princess. She had a lot to draw from, it turns out.

It would have been difficult for a librettist to invent a character as complicated as Cavalieri, who in her 20s had been a performer at the Folies Bergère and was often referred to as the most beautiful woman in the world. Peter Clark, a former archivist at the Met, described her as “a unique singer in Met history,” and her duet with Enrico Caruso, her co-star, in Act II of “Fedora,” must have been something to see. “I was so caught with my part,” Cavalieri wrote in her autobiography, “that I fell into his arms, and while the curtain was falling, I passionately kissed his precious lips.”

As if that were not enough, Clark said she stood out, even among divas, because the larger-than-life exploits that kept her in the headlines were “not restricted to being an opera singer.”

Which is where the Astor marriage comes in. “When she came to the Met in 1906,” according to the music writer Ruth Hume, “she annexed and later married young Robert Chanler, scion of a colorful branch of the Astor family.” Cavalieri’s biographers, Paul Fryer and Olga Usova, wrote that “the prospect of her marrying into the Astor family caused many raised eyebrows and considerable consternation among the powerful and wealthy families who dominated the great Four Hundred of New York society.”

“The bridegroom has put the broad Atlantic between himself and the bride,” The New York Times reported a week after the wedding, noting that “the wealthy Prince Bariatinsky of Russia has been constantly attentive to Mme. Cavalieri.” She and the prince had been involved before; she even referred to herself as the Princess Bariatinsky in her memoir.

For Cavalieri, breaking up was not hard to do. “He gave me all he had as a present: jewels, works of art, money,” she said in 1940 (when she also raised the possibility that the marriage had been a stunt, saying she and Chanler had made a bet that they could not remain married for longer than a week). She mentioned “the three mansions I had acquired.”

But if the marriage made Cavalieri rich, it also made her unemployable in New York. “It seems obvious that the Chanler affair prevented the Metropolitan Opera from featuring Cavalieri again,” Fryer and Usova wrote, presumably for fear of offending Met patrons who socialized with the Astors. The Met, “at the bidding of its wealthiest board members, was doing all in its power to get her out of town,” according to Ms. Hume. “When a young Vanderbilt gave evidence of being next on Lina’s dance card, her days at the Met were over.”

Cavalieri moved on to the Met’s rival, Manhattan Opera (founded by Oscar Hammerstein, grandfather of the Broadway powerhouse), but not for long. She returned to Europe, where she became a star in silent films. She also opened a beauty salon and, by one account, appeared in ads for Palmolive soap, “explaining that it was thanks to this product that she kept her beauty intact.” She also marketed her own perfume, “Mona Lina.”

Cavalieri was in her 60s when World War II broke out, living in Florence with husband No. 4. Her death was another dramatic episode: An air-raid siren sounded. Their household staff dashed to a shelter. But Cavalieri and her husband, who tarried, were still in their house when a stray bomb hit.

She had been collecting her jewelry, just as Manon Lescaut, another beautiful young opera heroine with a taste for luxury, had been doing when she was captured. Cavalieri had performed the role at the Met not long after her turn in “Fedora.”

Enjoy a sunny day with temps in the high 40s. At night, it will be partly cloudy with temps around the high 30s.

Credit…Jose A. Alvarado Jr. for The New York Times

Every week since 1976, Metropolitan Diary has published stories by, and for, New Yorkers. Readers helped us pick the best Diary entry of the year, and At Attention was a finalist in this year’s voting.

It was December 1967. I had just finished basic training at Fort Dix in New Jersey and was traveling to Boston in uniform. For reasons I no longer recall, I stopped in New York City on the way.

Walking on the Upper East Side in a snowstorm, I spied another man in a uniform. He was older, and his cap bore the familiar gold band that identified him as an officer.

I rendered a snappy salute. It was not returned. The uniform was unfamiliar, so I guessed he was a foreign officer. Military courtesy still required me to salute.

A little farther down the street, I encountered another officer and offered another salute that went unacknowledged. His uniform was strange to me as well.

The third time it happened, the man I saluted ignored me while holding the door for a couple on their way into a large apartment building.

I realized I had been saluting doormen.

Morgan Malget and Ed Shanahan contributed to New York Today. You can reach the team at [email protected]

Tags
New York She That Was With

A Year of Being the Most

How a Windfall of Special Education Funding Benefited Hasidic Schools